Last year I saw this photograph in an exhibition at the Schomburg. I wondered why was this photo featuring black babies crying titled, "Alligator Bait?" I was a disturbed and confused. I thought it was a horrible title.

A few months later, I was reading the book Copper Sun by Sharon Draper with my 9th graders. Copper Sun is a wonderful novel for teens telling the story of a young girl from Ghana named Amari who was enslaved in America. Although the book is fictional, it is based on true events. Draper does a great job with her research. There is a very disturbing scene in the book describing an enslaved child being used as alligator bait. The slave master would take the four year old child out to a lake, tie a rope around his legs and put him in the water. The child couldn't swim, so he would kick and scream in hopes of not drowning. This action would attract the alligators. Hopefully, the child would be pulled in before the alligator eats him. The book described this as a normal activity done to enslaved children.

In all of my readings about slavery, I have never come across this type of sickening activity. It just seemed so far out there, that I wondered, how could this be true? I was compelled to research this. During my research I found that there was actually a film called Alligator Bait in 1900. Following is the description:

This is a decidedly unique and interesting picture. A little colored baby is tied to a post on a tropical shore. A huge 'gator comes out of the water, and is about to devour the little kid, when a hunter appears and shoots the reptile.

I tried to get my hands on this film but couldn't find it anywhere.

There was also another film in 1900 titled, "Gator and the Pickaninny."

Both films were produced by American Mutoscope and Biograph. The company is still around today. D.W. Griffith's Birth of A Nation was also produced by this company.

After researching further, I found these pictures online at http://www.authentichistory.com/ 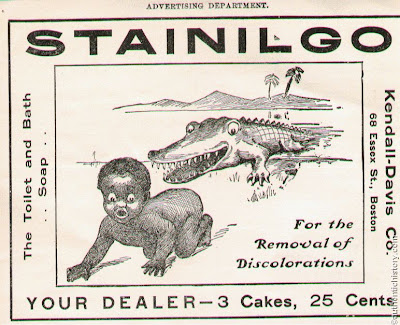 Following is a postcard made in 1911 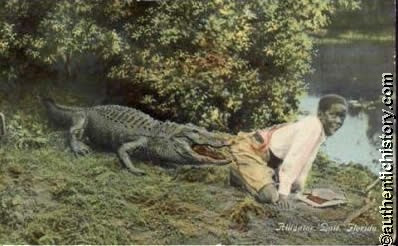 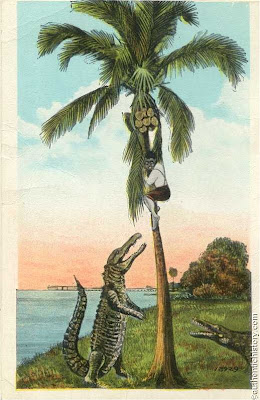 "Have you met the Florida gator?
He is the champion negro hater.
Although he finds many things to eat
His favorite morsel is negro meat." 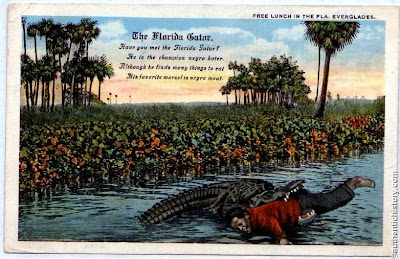 This is just one of sick horrors that are embedded in American History. When will we truly face our history and truly heal?
Posted by Delphine Fawundu-Buford at 9:41 PM

the 8th wonder of the world said...

American history of the negro race in this country has never been truthful. I my self done a lot of reseach about, slavery and the people that owned slaves. What eles could expect from them. Know what I've leard at the time of captivity of the negro race our people was put under these conditions,for breaking gods laws his statues and his comandment's it writen in the bible, we as people must remember, we are the children of isreal gods chosen son's and daughter's so we payed for the sin's of our forfather's and so will they. As the gods word also let's us know, peace

I spent some time researching the stories of gator bait babies, and while many horrible things were done during the period of US slavery and the Jim Crow era, there doesn't appear to be any evidence that any children were ever used as bait. There are at least three reasons why it probably never happened: http://shetterly.blogspot.com/2016/06/black-babies-used-as-gator-bait-history.html

Sharon Draper appears to have done what good writers do: she created something that has a powerful impact on the reader. But like many powerful things, it's not necessarily based on anything that's literally true.

I’m from the United States, i was been transformed to a Vampire through the help of Vampire Family in California, it was just as easy as possible, at first i was thinking it going to take a while for my ( D.N.A.) to respond to the spell, all i did was just to follow the procedure that i was been told, and i bet you that procedure I took change my entire life to something i ever desire, freedom, sickness free, pains free, fame, influence, connections and even more that i can. Thanks to my dear friend Mr. Enrique who directed me to Mystic vampire home.

Good Day,
Do You Want To Be A Vampire?
Been A Vampire Will Make You
• Make Stronger.
• Think Faster.
• World Famous
• Will Never Experience Suffering Anymore In Your Life.
• Can Never Be Oppressed By Anyone
• Above All You Will Live Very Long on Earth And Be Protected All Through Your Life.

My Name is, Paula James from Canada, i turn to a vampire any time i want to, I become a real vampire because of how people treat me, This world is a wicked world and not fair to any body. At the snack of my finger things are made happened. Am now a powerful vampire and no one step on me without an apology goes free. I turn to human being also at any time i want to. And am one of the most dreaded and respected person in my country. i am now also very famous and rich with the help of the VAMPIRES EMPIRE. i get what ever a want. i become a vampire through the help of my friend who introduce me into a vampire Kingdom by given me their email: jamessuccessfultemple45@gmail.com, if you want to become a powerful and a real vampire kindly contact the vampire kingdom on their email: jamessuccessfultemple45@gmail.com for help. it is real. Contact them today. jamessuccessfultemple45@gmail.com